One of the most important things in building your network marketing or home business is to get better and better at inviting. So many people, especially new people, try to invite, present, validate and close all in one conversation.

That’s just going to blow up in your face. Most people’s natural tendency is to talk, talk talk and talk some more. That was me when I started my business. No matter if you have a product to sample, a video to show people, a promo card or brochure to hand out, or whatever, your job is just to invite. Get them to take a look. Give them a taste. That’s it.

So, I’m going to give you three powerful secrets you can start using RIGHT NOW in your home business to dramatically increase your success with inviting. I have learned these three things along the way and they have made a huge difference not only in my results, but also in my confidence.

When inviting, the key is to take yourself out of it as much as possible. You are not asking anyone to be your customer or join your business. You are just inviting.

“Would you be open to looking at a way to earn extra money if it didn’t interfere with what you are already doing?”

“Will you watch this 15-minute video?”

I have to give a hat-tip to Eric Worre on this one. I listened to and read this training over and over and have implemented it with a lot more success than what I used to do.

This is simply another way to take pressure off of people and imply mutual benefit. This is a great one to use right after you as “Would you be open to…?” Examples:

“If I sent you a link to a short video, would you watch it by tonight?”

“If I gave you three free samples, would you try them and let me know your opinion?”

See how that implies a mutual benefit? “If I did this for you, would you do that for me?” It’s incredibly low to no pressure and lets people know you aren’t hung up on having them take a look. Remember, this is just a simple invitation.

Would you make yourself available?

This is a great one to use when inviting someone to an event. This is different and more powerful than just asking if they can come or if they have time to come.

Asking if they can come leaves it more open, and leaves the possibility of using time as an excuse. If someone can’t come, then they are basically saying something out of their control is keeping them from coming, which is a very easy excuse. “Ahhh, I would but I’ve got this thing…”

“Can you make yourself available?” is a questions that implies they have power. The power is in their hands to “make themselves available.” If they say no, then they are basically saying they do not have the power to create the time to come. That is a lot harder to admit than it is to blame some excuse that may or may not be real.

This also shows that their coming to this event or meeting is important to you. It shows that you understand they are busy and you respect their time. This can also work when following up: “I’d love to get your opinion on this video. Can you make yourself available tomorrow night for a quick call?” 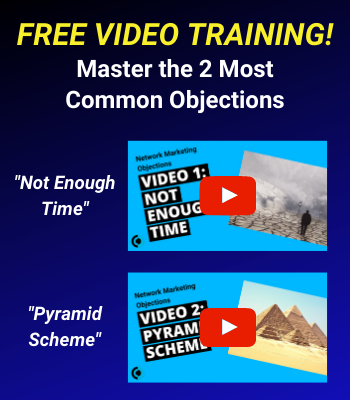